About a year ago I was contacted to write some iOS software to measure tremor in MS patients. I have no interest in writing iOS software. The only real hardware requirement was that the device had an accelerometer so I suggested using an Android device instead. The device would need to be fastened to the patients arm and be lightweight to limit it’s influence on the tremor. The perfect fit seemed to be an Android watch.

There were two capable Android watches available at the time, the WiMM One module and the i’m Watch. The WiMM One was already shipping, had stock and a price point less than half of what the I’m Watch was going for. At the time the i’m Watch was taking pre-orders with a promise of shipping soon.

I ordered a few of he WiMM modules and got to work writing the beta software on a Nexus S. I demoed the first version two weeks later.

Once the demo proved that I could get the desired sample rates I started shrinking it down and learning the WiMM API. Most of the differences lie in the way that the application screens are laid out. That allowed me to keep most of the functional code from the demo application.

The application is very simplistic from a GUI perspective in that it only displays a single button and a countdown timer. This is partly because the application needs limited user feedback but it’s also due to potential users of the application. One of the uses would be to monitor outpatients to track their tremor over time without requiring a clinic visit. These users would have limited eye hand coordination so the simpler the interface the better.

Another reason for targeting the WiMM device was it included wifi that would allow automated data collection. After collecting a data series the watch would connect to a server to upload the data. Once uploaded the data would be saved as a CSV. Then GNUplot was used to transform the CSV into a line graph of the X, Y and Z axes. After the data gets plotted the server also does an FFT and plots that. The FFT is done to expose any frequency elements in the tremors.

This is an example of the post processed data

There were a number of challenges with using the WiMM watch. I was familiar with Android 1.6 but the version on the WiMM is slightly modified for the smaller screen and other hardware peculiarities.

On of the challenging differences is the watch doesn’t follow the Android sensor API for the accelerometers. You are able to set a rate using the defines SENSOR_DELAY_FASTEST, SENSOR_DELAY_GAME and SENSOR_DELAY_NORMAL however you can’t specify an absolute rate for updates. To get around this issue I sampled at the highest rate possible ( 200Hz ) and decimated the samples I didn’t need.

Using this technique I was able to get 100, 150 and 200Hz sample rates. For the most part this did work well but rates over 100Hz still had problems. There were occasional gaps in the data that lasted upto 120ms. After some investigation I found the Dalvik GC was logging with times that were amazingly close to some of the gaps in my data.

By pre-allocating as many of the accelerometer data structures as possible I reduced the number of garbage collection cycles and the subsequent spaces in the data. Even once I solved this there are still the occasional gaps. My best guess at this point is that the accelerometer and the GUI are running at the same priority and occasionally collide.

The table at left shows a comparison between the WiMM module and a Entran accelerometer. The WiMM is sampling at 100Hz and the Entran around 2KHz. The data shows that the WiMM compares quite well to the standard analog sensor.

Tremors in people are well below the 50Hz that the WiMM should be able to resolve so it would function as an acceptable measurement device for in or out-patients with temors and tremor related diseases. 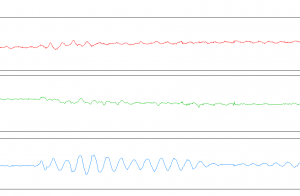 Data is starting to come in from the studies using the software. It is showing some interesting repetitive osculations which we expected. At right is an excerpt from a MS patient recorded during a clinic visit.

There are currently 2 studies using the software,  below is a synopsis of their work. Both of them should be publishing some of the results soon.

Traditional tools for accelerometry are cumbersome and do not lend themselves to routine clinical use. Using a smart watch device for accelerometry makes data collection very simple and portable, and may allow for wider use of accelerometry for tremor analysis. The potential of the on-board hardware for data processing and display makes this even more exciting. As a proof of concept, I am collecting accelerometer data simultaneously from the WIMM One and a standard analog accelerometer, and coanalyzing the data offline in the MATLAB environment to determine whether the performance of the WIMM One is acceptable. After this, I am collecting data from patients with Parkinson disease and Essential tremor to compare some aspects of these tremors to see if the portable device might be a useful diagnostic tool.

Study #2
As a clinician-scientist, I envision both clinical and research-oriented applications for watch-based accelerometry in the evaluation of tremor in Multiple Sclerosis (MS).

Clinically, I frequently encounter tremor in MS (MST). It is notoriously difficult to treat, meaning that patients need to try many interventions before (if ever) we find one that works. This problem is compounded by: (1) patient mobility and transportation issues – it is difficult and inconvenient for patients to return to the clinic frequently for re-evaluation of treatment efficacy, and (2) clinic availability – usually, I can only follow-up with patients every six months.

In research trials, it is necessary to have patients return frequently to the clinic for re-evaluation (which is problematic), and it is ideal to have a simple technique for quantifying tremor response to treatment.

By collecting tremor data remotely, treatment efficacy can be evaluated quickly, quantitatively, and conveniently. In clinical terms, this means we waste little time finding a treatment that works. In research terms, this allows us to objectively evaluate, with minimal inconvenience to the patient, potential new therapies for treating MST.

WiMM has gone dark about what their future holds and has stopped selling the devices.  They have also dropped all developer support.

This is where the i’m Watch comes into play. I’ve managed to reverse engineer the accelerometer and magnetometer in the watch and I’m currently rewriting the application to work on the new device.  I’ve already written a native i2c library that can get data from the watch and it is sampling at 100Hz.

Next I’ll need to establish the accuracy of the new accelerometer so it can be used to replace the WiMM watch.

Use the form below if you’d like to contact me or either of the Doctors running the studies.